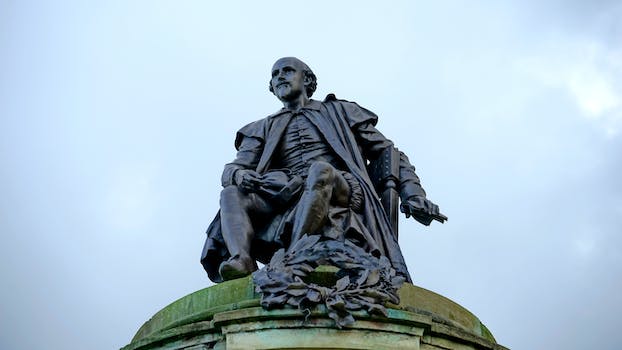 Having visited Stratford on Avon recently I had per chance to visit Shakespeare’s birthplace and experience the relative horrors of what it was like to live in Elizabethan times. Everyday life was hard and unhealthy! The Black Death was an ever present threat and it’s cause little understood.

We now regard Shakespeare as a literally genius and indeed he was.

Yet William Shakespeare was also a philosopher with amazing insight into the human condition. We can learn so much from his quotations.

Amazingly, in many ways he was also an ordinary chap who married at 18 to a lady six years his senior, who was pregnant at the time. Simply his main motivation for writing was to support his wife and three children. In his life he experience many hardship and was largely self-educated, when four hundred years ago 80% of the population couldn’t read. Beyond that little was known, except of course of his many insightful plays

I read ‘Julius Caesar’ at school for ‘O’ level English Literature, but frankly found the Elizabethan language hard going. Recently I went to a brilliant YMCA Scarborough production of ‘Kiss Me Kate’, a modern adaptation of Shakespeare’s ‘Taming of the Shrew’ and found the plot down to earth and entertaining. Life hasn’t changed that much in 400 years!

There are many quotations from the writer in his plays that live on.

Many have become part of our mental ‘stock in trade’.

Happy reading, if you have a little time!

‘Grist to the mill’ when it come to a better understanding of ourselves and fellow human beings.

The following is an abstract from the website of Dr James Le Fanu [www.jameslefanu.com] a highly respected medical practitioner well known for his weekly medical column in the Daily Telegraph.

Dr Le Fanu’s most recent book ‘Too Many Pills’ investigates the reasons behind the threefold rise in the number of prescriptions issued by doctors over the past fifteen years and the devastating consequences for many of a ‘hidden epidemic’ of drug induced illness.

The number of prescriptions issued by family doctors has soared threefold in just fifteen years with millions now committed to taking a cocktail of half a dozen (or more) different pills to lower the blood pressure and sugar levels, statins, bone strengthening and cardio protective drugs.

In ‘Too Many Pills’ James Le Fanu examines how this progressive medicalisation of people’s lives now poses a major threat to their health and wellbeing, responsible for a hidden epidemic of drug induced illness (muscular aches and pains, lethargy, insomnia, impaired memory and general decrepitude), a sharp increase in the number of emergency hospital admissions for serious side effects and implicated in the recently noted decline in life expectancy.

The origins of this medical catastrophe go back to the 1970’s and the immensely profitable shift in the marketing strategy of the pharmaceutical industry in favour of ‘selling to everyone’. Extrapolating from the certain benefits of treating those at high risk of stroke, heart attacks, diabetes and other illnesses, the drug companies have targeted the much greater numbers of the healthy redefining the normal as abnormal, exaggerating up to fifty fold the results of clinical trials designed to demonstrate the need to take medicines indefinitely.

This policy of mass medicalisation is now deeply entrenched in routine medical practice with family doctors financially incentivised to prescribe, their income dependent on their success in hitting targets of the proportion of their patients on treatment.

The paradoxically harmful, if increasingly well recognised, consequences of too much medicine are illustrated by the remarkable personal testimony of the readers of James Le Fanu’s weekly medical column, coerced into taking drugs they do not need, debilitated by their adverse effects – and their almost miraculous recovery on discontinuing them.

The only solution Le Fanu argues is for the public to take the initiative. His review of the relevant evidence for the efficacy, or otherwise, of commonly prescribed drugs should allow readers of ‘Too Many Pills’ to ask much more searching questions about the benefits and risks of the medicines they are taking.

People often ask me what condition I see and treat the most as a clinical hypnotherapist.

The short answer, after 12 years of experience in the profession, is : Anxiety.

Anxiety can take many forms, have many causes and express itself in many different way at varying levels. It is a common reaction to life events.

In itself, anxiety is a normal and natural emotional state that we all need to respond to danger in it’s various guises. It has fittingly been described as ‘fear spread thinly’.

We often become over-anxious when over-loaded with worries, when concerned about ourselves or others, when facing new challenges, addressing lifestyle changes, experiencing health issues, or finding a need to rise to higher expectations. Very many people feel they are ‘not good enough’ and lack self-belief or confidence.

Our ability to respond to change is often influenced by personality. Some people are literally born worriers. Others are more able to switch off, or compartmentalise, their concerns more easily. They might enjoy a challenge and view anxiety more as excitement. Think of kids on a big dipper!

Our life-time experiences (mental conditioning) over time – particularly in the formative years before adulthood – will have moulded our personality from the moment of birth. Even before birth. And, of course, we inherit certain characteristics too. These create our unconscious, or automatic responses, to stressful events. We can often react instinctively  based on the way we’ve been ‘programmed’ by life.

Of course, being over-anxious can have physical and mental effects which generally are not in our interest. An out-of-control panic attack is one manifestation. Hypertension (high blood pressure) is another. Anxiety can cause us to avoid progressing through life too and rising to new challenges. Quite simply, anxiety can undermine our happiness potential.

So if we can bring it down to a more acceptable level that enhances (not reduce) our enjoyment of life that can often make a huge difference.

In hypnotherapy I utilise the pleasant and relaxed state of hypnosis to change your unconscious and over-anxious response to events. This leads to less worry, greater acceptance of uncertainty and a stronger belief in your own ability to enjoy life.

What I Look For in Clients

To be successful any client coming to see me for clinical hypnotherapy most possess the following:

Depression: cause or effect?

A recent supposition by psychiatrist Professor Edward Bullmore in his book ‘ The Inflated Mind’ is that depression is CAUSED by inflammation in the body.

It is well known that inflammation is an immune response which occurs when we are stressed. The most obvious visible form of inflammation is a redness from a physical injury when more blood flows to the damaged area.

Less obviously, levels of inflammation are associated with chronic diseases, including diabetes, cancer, rheumatoid arthritis, asthma and gum disease. It seem reasonable therefore to add depression – when we are certainly stressed – to this list.

For decades the standard medical treat for depression has been prescribed antidepressants, SSRIs (selective serotonin reuptake inhibitors) which can have a range of unpleasant side-effects and don’t work for everyone.

The idea that an illness of the mind can be treated with a pill might seem reasonable as a quick-fix but in no way however does it address the REAL REASON why a person is depressed.

We can get depressed for many reasons: financial problems, relationship breakup, insecurity, job loss, overwork, inability to cope, isolation, physical illness, worry about family members, bereavement and poor living conditions among others.

Depression might also be traced to an emotionally unresolved past event. Emotional experiences during childhood can linger in the unconscious well into adulthood. These can perpetuate a pattern of depression throughout life. It is this underlying cause which needs to be identified and resolved.

Why do medically trained doctors – including psychiatrists who come with the same basic medical school training – insist in looking for physical (medical) causes of depression? In the majority of people, depression arises from psychological factors. The physical medical symptoms – such as inflammation or changes in brain chemistry – are not causes, but simply symptoms of distress.

Are We Becoming a More Addictive Society?

In my hypnotherapy work I often see clients who have an addiction, or some form of strong attachment to an aspect of their life

END_OF_DOCUMENT_TOKEN_TO_BE_REPLACED

Role Models: do they matter?

We are all influenced by our interactions with other people. This is particularly true during the formative years when our maturity is developing. It is then we unconsciously seek out others to model ourself on, people we admire and wish to emulate in some way. END_OF_DOCUMENT_TOKEN_TO_BE_REPLACED

Scarborough Hypnotherapy
Create a free website or blog at WordPress.com.